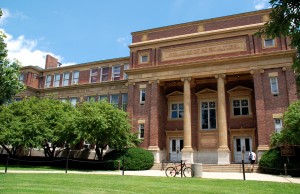 Davenport Hall, one of the oldest academic buildings on the University of Illinois campus, has a large inscription ground into one the terra cotta adornments that flank the grand entrance:

“Industrial education prepares the way for a millennium of labor.”

When I first saw those words in 1998, they did not conjure up a happy vision of the future.  “Millennium of labor“?  Just seeing them made me tired.

That phrase was first shared during a lecture at the very first Illinois State Fair in 1853, and the person who authored them had a much more inspiring vision for the world than the image they may evoke in the 21st century.

The phrase was authored by Jonathan Baldwin Turner,  who dedicated much of his life to transforming the world of work.

Turner was one of the leaders of the industrial education movement that produced land grant universities in the United States.  Turner’s vision for highly educated agricultural and industrial workers was in opposition to the practice of higher education at the time, which emphasized classical liberal arts studies.  Practical, public education in agriculture, science and engineering would create generations of Americans who would exhibit a “loftier character than any other living man”.

In other words, higher education institutions should exist that value creating intelligent, working people. Give them the environment and support they need, and they could do the work of the industrial revolution.

Turner’s vision was made real in the form of the Morrill Act of 1862, which led to the creation of over 70 land grant colleges and universities which have the charter of “providing a sure and perpetual foundation, accessible to all…where all of needful science for the practical avocations of life shall be taught”.   Land grant schools were among the first to admit women and people of color as part of their core mission, and have always treated access to practical public education for working people as a primary measure of success.

159 years after Turner gave the Millennium of Labor lecture, we know that industrial approaches to work don’t meet the needs of the current age.  But this post isn’t about that – it’s about the level of commitment Turner needed to create the transformation he sought.

What Kind of Commitment Was Required from Turner?

Turner was an agitator.  Not long after his arrival in Illinois in the 1840s, his vocal abolitionist stance got him fired from his job as a professor at Illinois College in Jacksonville.  He was a participant in the first meeting in Illinois of the anti-slavery organization that later became the Republican party. Years later, after passage of the Morrill Act, Turner turned his energy toward battling the power of corporations, which he described as a conflict between “the Natural and the Artificial Man.”, and also fought for rights for the mentally ill in Illinois’ hospitals for the insane.

Excerpts from the Millenium of Labor lecture can sound like exctatic poetry or a firey sermon at a tent meeting:

“There is a good time coming! Poets have sung of their golden era! The devout of all ages have clung to this hope and their sages and prophets, in the hour of their darkest gloom, have ever fixed their eye upon the future risings of this millennial dawn…
“Whenever the time comes that the real farmer gets abroad in the world, he will exhibit a loftier character than any other living man, and herald a brighter day than even when his antiquated progenitor, the schoolmaster came!…In that day all the humbuggery and the cant that now reign in the books and the schools, about these schools being unfavorable to the development of the very highest order of intellectual and moral power, will vanish away; for the living man will be there to give the lie to it all, and the whole world will find out, at last, that intelligent labor is the friend, not the foe of mind…”

Opposition to the industrial education movement came from traditional colleges and those who opposed non-sectarian education, and from many farmers who felt that education would lead to the young abandoning agriculture in favor of “book farming”.

Turner’s agitation aroused such anger in his opponents that it led to an act that directly challenged his commitment.  In order to prevent him from speaking, the night before he was deliver the Millenium of Labor lecture at the State Fair, his farm was set ablaze, destroying all of his animals, vehicles and equipment, and stored grain.  His family escaped safely with the help of friends and neighbors.

Upon learning that they was safe, Turner went on to deliver his lecture the next day, and continued to agitate on behalf of industrial education until the Morrill Act was passed nine years later.  In 1870, Turner gave the address when the cornerstone of  what is now the University of Illinois was laid, establishing his home state’s first land grant college.

Transformation Creates Results Beyond What We Can Comprehend

Ninety-three years after Turner’s words were inscribed onto the walls of Davenport Hall, and only a couple blocks away, Marc Andressen, the son of an agricultural seed salesman  and a retail company worker from New Lisbon, Wisconsin co-created NCSA Mosaic, the browser that popularized the World Wide Web.   Mosaic became popular very quickly because made the Web practical for anyone to use.  You no longer had to be a geek to do things on the Internet, which opened up a new way of communicating and working for a new millennium.

Turner couldn’t comprehend that his vision for industrial education would lead to what land-grant universities stand for today.   But industrial education was just the means to Turner’s ultimate vision of what he meant by the “millennium of labor” – that anyone who works would have access to higher education, and that would establish a “nobler and better civilization”.

So, the next time you start talking to your customers, co-workers, and others about transforming the world of work, remember the level of commitment Jonathan Baldwin Turner had, the price he paid in agitating for that commitment, and what we all gained for it. Transformation is a huge game that requires a huge commitment,  and will lead to results that we can’t begin to comprehend.

This entry was posted in Commitment, Education, Transformation. Bookmark the permalink.